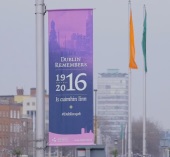 What a memorable year it has been! It being the centenary of the 1916 Rising, Dublin City Council has been proud to support and enable the Ireland 2016 state programme of formal commemorative events that took place in Dublin during this past year. The "Dublin Remembers 1916-2016: Is Cuimhin Linn programme" programme presented a series of lectures, talks by expert historians, exhibitions and conferences in Dublin libraries, City Hall, Dublin City Gallery The Hugh Lane and other venues in the city throughout the year. 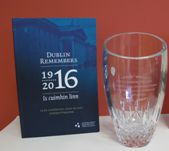 View the video shorts below of some of the highlight events of the year.

Below are just a few images of events throughout the year, click each to view larger versions.

Be sure to visit the Decade of Commemorations page during 2017 to be kept informed of events to come.