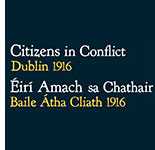 Citizens in Conflict #4. The area in which the 3rd Battalion was to operate was a very large one and far more men were expected to be available then turned out to be the case.

Positions Held: Boland’s Bakery, Boland’s Mills, close by, the Dock Milling Company's Premises and adjoining the latter the Railway Locomotive Works, Barrow Street, the Dispensary, Clanwilliam House with its outposts at 25 Northumberland Road, the Parochial Hall, and Carrisbrooke House, Westland Row Railway Station, Railway Level Crossing at Lansdowne Road, builders' yard alongside Clanwilliam House, Horan’s Fort at the corner of Haddington Road and South Lotts Road, the railway line was held at many points between Westland Row Station and the Level Crossing, Guinness' Stores, many other stores and warehouses clustering round the docks and manned by snipers.

Battalion Headquarters: Boland's Bakery. It is also stated that Commandant de Valera used the dispensary as a headquarters. The Battalion's task was to organise positions in the Boland’s Mills Area to prevent entry into the city from the East and deny the use of the Railway Line to enemy transportation of troops from Dún Laoghaire. The main engagement was on Wednesday when the British finally succeeded in dislodging the Clanwilliam House garrison which permitted their troops to continue to Trinity College. No further encroachment was made into the positions although many minor attacks were launched. Both the British and the Volunteers were busily engaged in heavy sniping all week. The British posted M.G.s in commanding positions, i.e., Percy Place, Haddington Road Church, Beggars Bush Barracks from which many sorties were made. Communication with the GPO ceased about Thursday. On Wednesday or Thursday a party of 15 cyclists were sent from Jacob’s Factory to relieve the pressure on the defenders in this area, but the attempt was not a success due to the strong cordon of British in the vicinity. The Battalion surrendered at about  2pm on the following Sunday, 30 May.

Westland Row Station was occupied at about noon on Easter Monday. The party dismantled the signal box, cleared the platform, closed and barricaded the station by 6.30 pm on Monday. A trench was dug on the line about half way between the station and Boland's Bakery. The sleepers were destroyed at many points. On Wednesday the station proper was vacated, and positions taken up at the trench. During the week the party was mainly engaged in sniping. The officer in command of operations between the railway station and the Bakery was Capt. Seán McMahon. Small bodies of Volunteers manned the viaducts and were continually sniping the British preventing them from filtering into the rest of the Bn. Area.

Strength: Initially about 13, and with reinforcements and withdrawals remained at 13.

Distribution and occupation: Clanwilliam House: occupied about noon on Monday by George Reynolds and four others. One left that night, four reported from Battalion headquarters on Tuesday, one runner failed to return leaving a strength on Wednesday of seven.

No. 25 Northumberland Road: Occupied about noon on Monday by four with Lieut. Malone in command, two dispatched to Battalion headquarters on Tuesday leaving a total of two.

Carrisbroke House: Occupied by about three at noon on Monday and vacated the same day.

The School: Occupied on Monday by two or three and vacated on Tuesday.

Engagement: On Wednesday, 26 April at about 12.30 pm the 7th and 8th Battalions of the Sherwood Foresters, part of the two brigades that landed at Dún Laoghaire, were marching along Northumberland Road towards the city, when they were engaged by Malone's Volunteers. The total strength of the British was estimated at 2,000 but the strength of the advanced elements who were engaged was put at 800. The head of the column had passed No. 25 when the firing opened from all posts. A terrific battle followed. Lieut. Malone was killed in the evening and his companion succeeded in escaping. Clanwilliam House now bore the brunt of the fighting. At times British troops came under fire from other posts in the Battalion area, i.e., the builders' yard alongside the house, and the railway line. Repeated assaults on the house were repulsed and it was not till 8 pm when a one-pounder was brought into play that the garrison withdrew to headquarters, leaving George Reynolds, Dick Murphy and Patrick Doyle behind dead. The builders' yard party, about eight, withdrew to the dispensary at the same time, as did a small party alongside the builders' yard. General Maxwell in his report states that the British casualties were '4 officers killed, 14 wounded and 216 other ranks killed and wounded.'

The railway level crossing was occupied at about 12 noon on Easter Monday by five men with Seán Goulding in charge. On Monday night he received an extra four men and placed them in Judge Johnson's House, No. 60, Lansdowne Road. On Wednesday during the Mount Street Bridge engagement a party of British succeeded in reaching the railway line between this post and Horan's Fort. They came under fire from both positions and were forced to withdraw.'

Horan's Fort was occupied on Monday at about noon by 12 men under Capt. O'Mara. This party engaged all British sorties from Beggars Bush Barracks and held a very strategic position. It engaged a party of British that gained the railway line on Wednesday and forced them to withdraw. O'Mara had about 5 men in occupation of a trench on the Rly. Line a short distance from the fort.'

Boland’s Mills were occupied at about noon on Easter Monday morning by about 14 men under Lieut. Joseph Byrne. On Wednesday a party of British sent by Sandymount in an attempt to outflank the 3rd Battalion position, was met by the force in Boland’s Mills and driven back in disorder.

'Boland's Bakery was organised as Battalion headquarters and supply depot. C.A. System for reliefs for other posts was directed from it, and was not used as a base for offensive operations. Its defence was the task of Simon Donnelly.' (R. Henderson, WS 1686). 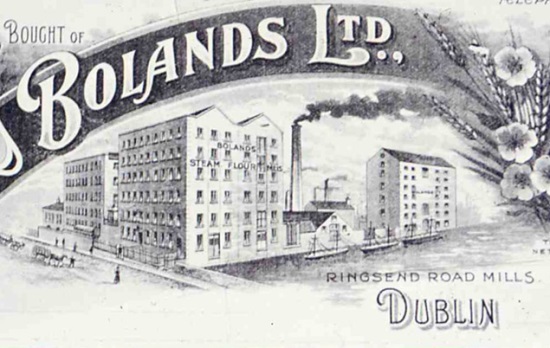 A high and strong building dominating the entire area held three or four snipers. It was fired upon by the Gun Boat 'Helga' during the week and it is also stated that a naval gun on a horse lorry near Percy Place brought its fire to bear on it. The Distillery was presumed by the British to be the headquarters of the area because of the fact that the Tri-colour flag was floating on top of the building.

The railway workshops were occupied about noon on Easter Monday by 12 men under Lieut. Guilfoyle. Two or three snipers were posted on the railway water tanks, while others, about seven, manned the railway wall facing in the direction of Mount Street Bridge. The remainder occupied the workshops. During the attacks on Clanwilliam House these men brought effective fire to bear on the British whenever they came on the bridge or approached from the blind side of the house along Warrington Place. On Thursday a particularly strong effort was made by the British, about 15 soldiers, to enter the workshops, and even attempted to dig in but were repulsed by a successful bayonet charge.'

The Guinness stores were occupied on Thursday night by about 12 but vacated early next morning.

Dr Brian Hanley presents a three part lecture series in Dublin City Public Libraries during February and March 2016 examining in detail the lead up to the Rising, what really happened over those momentous days and its impact on future generations. Part of the Dublin City Council 1916/2016 Centenary Programme.