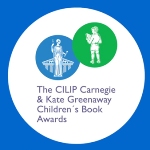 We are delighted to see Irish literary talent featuring on award shortlists once again! This time congratulations are due to Oliver Jeffers and Sarah Crossan, as their fabulous books have made it onto the prestigious Carnegie and Greenaway Medal Shortlists. Oliver Jeffers' beautiful picture book Once upon an Alphabet is a book to buy and treasure.  Sarah Crossan's remarkable young adult novel One has already been named on the CBI Book Awards and YA Book Prize shortlists.