Children's Books Ireland has announced the shortlist for their 2016 Book of the Year Awards. The awards celebrate the very best in Irish children's literature. They are open to any children's book written in English or Irish by Irish born or resident authors and illustrators.

The 2016 shortlist covers titles for all ages, from charming picture books for the youngest book lovers, to young adult fiction with dark and difficult themes. It features previous CBI Book of the Year winners Oliver Jeffers (Once Upon an Alphabet, 2015) and  John Boyne (The Boy in the Striped Pyjamas, 2007). Louise O'Neill's Asking For It has already gathered praise and generated much discussion since it was published last year and in December it was chosen by public vote as the Bord Gáis Energy Book of the Year 2015. 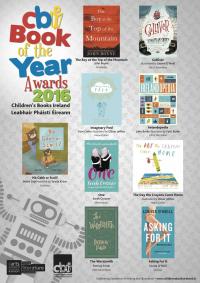 The shortlisted titles are:

We're looking forward to the winner announcement at Smock Alley Theatre on 23 May. Best of luck to all shortlisted!