Many of Dublin’s most striking buildings tell us stories about the past, not least in how travel into and around the city has changed over the years. If you are taking the Luas to the Technical University Dublin (TU Dublin) campus at Grangegorman, you can alight at the Broadstone stop.

From the platform level you can just about see the upper level of Broadstone Station, which is obscured by a high concrete wall but if you walk just a little way down Constitution Hill, turn right and climb the hill (over what was once an aqueduct) towards Grangegorman, you can see the front façade of Broadstone Station. Its history is a reminder of how the purpose of workplaces can change as part of a wider process of industrialisation and accompanying technological development.

The building was designed by one of Ireland's most illustrious 19th century architects, John Skipton Mulvaney (1813-1870) and it was originally the terminus of the Midland and Great Western Railway (M&GWR). The main building was completed in 1847, on a site previously known as Broadstone Harbour. This had been the terminus of the Royal Canal and an important transport hub in its turn, before the canal was extended further into the city in 1874-75, with the building of Spencer Dock at North Wall Quay.

As transatlantic passenger traffic increased in the second half of the 19th century, there was a plan to make Galway the main port for transatlantic passenger traffic between Europe and North America. The M&GWR competed successfully with the Great Southern Railway to be the first to bring passengers  from Dublin and the Eastern seaboard to Galway and the line opened in 1851. From the other direction, the M&GWR provided a special fourth class for poor migrants from the west of Ireland going to Britain for work. The line, which branched out to serve Sligo, Westport, Achill and Clifden, was also used to transport huge numbers of cattle. Such was the demand for rail transport, from 1872 the M&GWR began building its own locomotives at Broadstone at a part of the site that is now occupied by the Dublin Bus Depot. 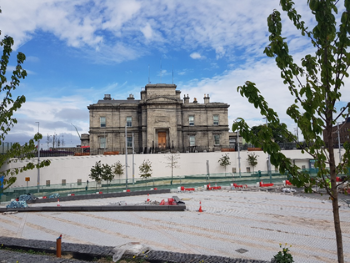 The building now serves as the administrative centre for Bus Éireann and Dublin Bus and is not open to the general public. However, it is possible to see a virtual view of the interior. The Luas Broadstone stop is very different in scale but has its own distinctive appeal, which will soon be enhanced by the creation of a plaza looking up towards the old station on the hill. With the opening of the next phase of TU Dublin planned for September 2020 (Covid19 permitting) Broadstone will once again be a vital transport focal point.

Want to spend this ‘Stay At Home’ time reading, or even studying more history? Why not try out some of Dublin City Libraries history resources, you can use them with your library card and everything is free:

Find out the history and provenance of Dublin place names and monuments with the Historians in Residence live Facebook talks (https://www.facebook.com/DubHistorians) and online video lectures.

On the library blog you can read the historians’ quick reads on topical subjects like the flu pandemic of 100 years ago, Molly Malone (did she really die of a fever?), when Dublin Telephonists challenged the government, and lots more.

There are 30 online history courses on Universal Class complete with assignments and a tutor, including the American Civil War, World Wars I and II, Ancient Civilisations, and economic history.

Keep in touch by following us on twitter at @histfest @dubhistorians