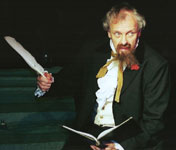 And to mark the occasion, Laurence Foster has re-created Charles Dickens’ first public performance in Ireland, and the performances (Dickens in Dublin) are taking place in a number of our branch libraries (details below - but do check with location, may well be booked out at this stage).

Charles John Huffam Dickens was born on February 7th in 1812 in Portsmouth. Shortly afterwards, the family moved to London. At 19, having had little formal education, Charles became a reporter and recorded the parliamentary speeches of Daniel O’Connell, the Irish Liberator. They retained a lifelong mutual admiration. In August, 1858 Dickens paid the first of three lengthy visits to Dublin and was hailed with delight everywhere he went. He often found it difficult to make his way from Morrison’s Hotel (on the corner of Dawson Street and Nassau Street) and through the crowds who were queuing to see his performance. Dickens in Dublin is a recreation of that dramatic evening in Ireland’s capital city.

To mark the 200th anniversary of Charles Dickens's birth why not read (or re-read!) some of his classic tales. Check our catalogue for availability of Dickens' wonderful books and film or television adaptations.