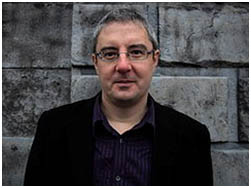 Author Conor Kostick has just been nominated by Ireland for the prestigious international award The Astrid Lindgren Memorial Award. 'It's very flattering', Conor told me when I met up with him on one of his visits to Cabra Library to meet young readers. 'I'm really proud of the honour and very proud of the association with Astrid Lindgren herself. In Pippi Longstocking, Astrid Lindgren created one of the most delightfully irreverent and independent characters in children's literature; this creation was connected to the fact that Astrid Lindgren herself was a radical humanist and opponent of violence. There is a humanist philosophy at work in my books and maybe they (the nominating bodies) picked up on that. I'm extremely proud to be associated with her legacy.'

Conor Kostick lives in Dublin and his 'day job' is teaching Medieval History in Trinity College. 'Epic' was his first novel, and this was followed by 'Saga' and 'Edda', making up the Avatar Chronicles trilogy. These novels are very popular with children from age ten to early teens. I've recommended the first book 'EPIC' to many young readers and they have gone on to recommend it to their own friends - you can't get a better endorsement than that!

Conor also wrote a book for younger readers, 'The Book of Curses' in the Forbidden Files Series. This is soon to be joined by 'The Book of Wishes' which Conor describes as his 'good twin book' to the 'Book of Curses' - it's is a bit scary, but fun too. It's not in shops or libraries yet, but it will be soon, so keep your eyes open - or reserve a copy at your local library.

The other Irish nominee for 2012 is storyteller Eddie Lenihan. Writers and artists from other countries who have been nominated this year include; Micael Rosen, Quentin Blake, Shirley Hughes, Eric Carle, Allan Ahlberg, David Almond, Margaret Mahy and Meg Rosoff. As Conor says, 'To be awarded a place on the list of nominees is a real honour'.

Conor's books are published in Ireland by O'Brien Press and are available (as they say) from all good bookshops and to borrow from branches of Dublin City Libraries.

My recent interview with Conor will be published in the next issue of Classmate magazine - a Dublin City Council publication which is distributed free to all primary schools in Dublin City. I also hope to include that interview in a forthcoming article on this blog - so keep logging on.