The Irish Revolution on BorrowBox

Our colleague Anne-Marie has some reading recommendations for you on the Irish War of Independence.

The War of Independende was fought by the Irish Republican Army against the British forces between 1919 and 1921 when the fighting stopped while a peace treaty was worked out.

The titles listed below are available on BorrowBox; see more on how to access BorrowBox at the bottom of this post.

The Irish War of Independence by Michael Hopkinson

Hopkinson’s book on the Irish War of Independence is a concise and detailed account of the period. He offers an excellent breakdown of the conflict, including an analysis of how the war began and he provides an essential insight into the last years of the British administration in Ireland. He traces the development of the IRA guerrilla campaign in the country including an overview of the intelligence war conducted by Collins and how this penetrated the heart of Dublin Castle and civil service in Ireland. Hopkinson documents the activity of the IRA in the most active counties during the war and he complements this with the added international dimension, including the support provided through American sympathisers of the Republican movement.

Overall this book provides an excellent and valuable account of the War of Independence in Ireland.

Sean Enright’s account of law and execution during the civil war shines a new light on this dark period of Irish History. The author draws on military and legal documents to provide an excellent overview of individual cases of robbery, murder and gun possession. Most chapters are short but compact as Enright effectively conveys the chaos of civil war and how the new Irish administration dealt severely with those who continued to pose an armed threat to the nascent state.

Enright covers the various military trials and exposes how the rule of law was often subverted by those who were responsible for upholding it. Some executions occurred without any trial at all and the author’s storytelling abilities provide a compelling read in this welcome addition to Irish Civil War historiography. 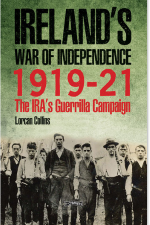 Lorcan Collins’ overview of the Irish War of Independence details all the major events of the period from the beginning of the guerrilla campaign to the various ambushes and counter measures imposed by the British on Ireland during these years. The author captures some of the lesser known events of this period, such as a fireman who helped Republicans during the burning of the Customs House and the prison escapes that occurred often throughout the war.

Collins’ book is an accessible account of the period and is a must read for those seeking a good overview of the Irish revolution.

In this book, O’Dubhir traces the life of internees at Ballykinlar Camp from its opening at the height of the War of Independence December 1920 to the releases in 1921. Each chapter provides specific details of the internment experience, ranging from the monotony of camp life to the various activities undertaken by internees in an attempt to occupy their time. The author provides a detailed account of sporting events, art and drama activities and educational classes that occurred during the final year of the conflict. O’Duibhir also relates the internal strife within the camp including cases of ill treatment and the various escape attempts organised from within the camp by the prisoners.

This book is a well-rounded account of internment in these troubling times.

Watch our how-to video on Borrowbox.

Check out details of how to access eBooks/eAudiobooks on your phone, tablet or reader. Once you have installed the app, search for Dublin in the ‘Library’ field provided and then sign in using your library membership card number and PIN.

Members of other library authorities will need to access BorrowBox using a different link.