Jonathan Stroud - The Bartimaeus Trilogy. A Must Read for Every Fantasy Fan 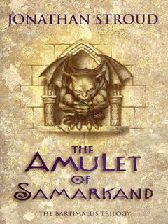 "The temperature of the room dropped fast. Ice formed on the curtains and crusted thickly around the lights in the ceiling. Then two yellow staring eyes materialized in the smoke. "Hey, it was his first time. I wanted to scare him"."

This is the beginning of Jonathan Stroud's Bartimaeus Trilogy, a fantasy series that is all at once fantastic, thrilling and funny, with two main characters that will immediately capture your heart.

So what's it about? The story is set in a world where wizards are the most powerful people, and humans without magical powers are lower class people. Wizards conjure up demons to work for them, but they treat them like dangerous slaves knowing that a demon will take every chance he gets to kill his master.

The first book in the series, "The Amulet of Samarkand",  starts with a conjuration. Nathaniel, a very young wizard who is far too young to be allowed to adjure a demon. But Nathaniel is very talented. He conjures Bartimaeus a very powerful old demon. He should know what risk he is taking because conjuring "is not like hailing a cab. You don't get just anybody if you call".

The story is told through the eyes of the demon Bartimaeus who he is a very unusual demon with a very good sense of humour. Bartimaeus doesn't like to be adjured anyway but a little boy trying to give him orders is really unacceptable. Unfortunately for him this boy is a very good wizard, so he doesn’t make any mistake that would allow Bartimaeus to kill him, and he is very good at getting both of them in a lot of trouble. Bartimaeus doesn't like trouble either, he knows when it is better to run away as fast as you can instead of fighting back. But unfortunately Nathaniel doesn’t know this and Bartimaeus has to protect Nathaniel and to obey his orders.

And so they become a team although they don't like each other. This changes with the adventures they survive together, but they are both far too proud to admit it.

The other books of the trilogy are "The Golem's Eye" and "Ptolemy's Gate". There is also a prequel that tells of the adventures Bartimaeus has experienced before called "The Ring of Salomon".

Fabienne Sauberlich is a student of Library and Information Science in Germany with special interests in Psychology, Horror, Fantasy and Mystery Media.