The Most Borrowed Books in 2014 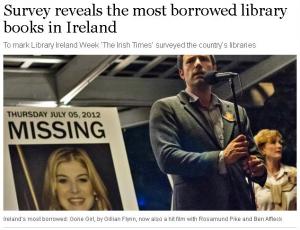 The Irish Times today (Mon, 17th Nov) published a story - "Survey reveals the most borrowed library books in Ireland" - listing,as the title states, the most borrowed books in Irish public libraries in the year to date. Dublin City Public Libraries contributed to the survey of course, and for your delectation we reproduce below some of the data we furnished. Topping the fiction list in Dublin City is the winner of the International IMPAC Dublin Literary Award, 'The Sound of Things Falling' by Colombian author Juan Gabriel Vásquez. Interesting to note also that the list is dominated by titles on the Award shortlist. The most popular non-fiction title has been the book selected for last April's Dublin: One City, One Book reading initiative, 'If Ever You Go: a Map of Dublin in Poetry and Song'.

The top children's title, 'The Powers: the Not-So-Super Superheroes' by Kevin Stevens, in fact topped the overall list here in Dublin City, while the 'Diary of a Wimpy Kid' series has proven to be the best read series by some distance. As if to demonstrate the 'power' of library reading initiatives, 'The Powers' was the 2014 Citywide Read for Children choice.

(titles links below are to the library catalogue)