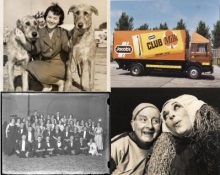 Traffic jams during the 1974 CIE Bus Strikes,  Croagh Patrick Pilgrimages (1958), and jubilant Heffo’s army supporters are among 43,000 historic photographs and documents  which are being made freely available online by Dublin City Council today.  These formerly unseen images date as early as 1757 and include photographs, postcards, letters, maps and historical memorabilia.

Highlights of the collection, which can be found at digital.libraries.dublincity.ie, include the Fáilte Ireland Photographic Collection with images of people, places and tourist locations all across Ireland from the 1930s, the Irish Theatre Archive Photographic Collection, and Dublin City Council Photographic Collection. Much of the material provides photographic evidence of Dublin's ever-changing streetscapes and buildings, as well as significant social, cultural, sporting, and political events in the City. Events as diverse as the Eucharistic Congress (1932), bonny baby competitions in the North Inner City, and the Dublin Football Team of the 1970s all feature, along with sombre Dublin streets in the aftermath of tragedies such as the 1941 North Strand and the 1974 Bombings. 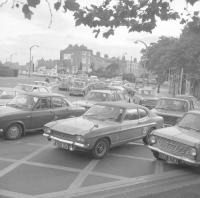 Two collections which are hugely significant in this Decade of Commemoration also are accessible on the Digital Repository. The Birth of the Republic Collection, which comprises material from the period of the foundation of the Irish State and archives of Royal Dublin Fusiliers Association which relate to Irishmen in World War 1. More material relating to 1912-1922 period will be added over the coming months and years, including the unique Jacobs Biscuit Factory Archive.

Margaret Hayes, City Librarian, says:
"This new online service will provide people in Dublin and throughout the world with free and easy access to the rich collections  of Dublin City Libraries and Archives. Indeed, we look forward to the public helping us by providing additional information on the people and places featured."

Members of the public are invited to #explorehistory and enjoy this new resource free of charge, and the Digital Repository will be invaluable to local history and heritage groups, researchers and schools.

Right: Despite defeat, there was a huge turn-out on the streets of Dublin for the defeated 1978 All-Ireland finalists. (click image to view original)

To uncover information on collections not yet digitized, explore Dublin City Library and Archive and the Dublin and Irish Collections, or visit us in the Reading Room.

Size of Dublin City Libraries Special Collections as of the 24th January 2017: 32,161 objects

Content is being made available for the purposes of research and education and as an alternative to directly accessing the analogue originals. Please review our terms & conditions of use.