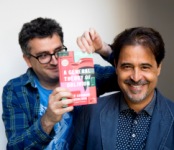 On the evening of Thursday, 22 June, literary award winners José Eduardo Agualusa and Daniel Hahn gave a reading, followed by a Q&A session, introduced and moderated by Sinéad Crowley, in Dublin City Library & Archive, Pearse Street. Author José Eduardo Agualusa and translator Daniel Hahn were announced as winners of the 2017 International DUBLIN Literary Award for Agualusa's novel A General Theory of Oblivion at a ceremony in Dublin’s Mansion House on Wednesday, 21 June 2017.

Listen to the reading and interview [play time: 53:46 minutes]:

A General Theory of Oblivion tells the story of Ludo, who on the eve of Angolan independence, bricks herself into her apartment, where she will remain for the next thirty years. She lives off vegetables and pigeons, burns her furniture and books to stay alive and keeps herself busy by writing her story on the walls of her home.

The outside world slowly seeps into Ludo’s life through snippets on the radio, voices from next door, glimpses of a man fleeing his pursuers and a note attached to a bird’s foot. Until one day she meets Sabalu, a young boy from the street who climbs up to her terrace.

A General Theory of Oblivion is available to borrow from Dublin City Public Libraries.