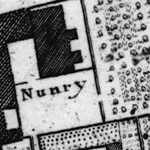 The lecture looks at the social world of the communities of Poor Clare and Dominican nuns who established themselves in the Oxmantown/Grangegorman area of Dublin in the early eighteenth century.

The lecture was published in 2018 and is available to purchase and borrow.  How to purchase / check availability in the library catalogue.

Listen to the lecture

About John T. Gilbert and the Gilbert Library
John T. Gilbert's valuable library of mainly 17th and 18th century books and manuscripts relating to Dublin and Ireland was purchased by Dublin Corporation after his death in 1898. It forms the nucleus of the special collections of Dublin City Public Libraries.

Born in 1829, Gilbert was author of the influential three volume 'History of the city of Dublin', published from 1857-59. He was a firm advocate of documenting the history of his native city using primary sources. His work on manuscripts relating to the city alerted him to the need for the preservation of Irish public records, many of which were in a neglected and vulnerable condition. He commenced a campaign, which eventually led to the setting up of the Public Records Office in the Four Courts. He calendared the records of Dublin Corporation, which date from the twelfth century, and began the series of printed volumes The calendar of ancient records of the city of Dublin.

The printed catalogue of the books and manuscripts of the Gilbert collection compiled by Douglas Hyde, LL.D & D.J. O'Donoghue is available for consultation in the Reading Room, Dublin City Library & Archive. View John T. Gilbert in the library online catalogue.