How to Scan and Digitize Glass Plate Photographs 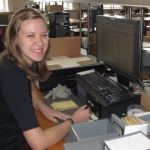 Technology is an ever-changing form for the collection and communication of information. What happens, however, when the form of equipment is no longer the current practice of collecting information? What happens when the method is out dated and showing its age? At Dublin City Library and Archive, the staff work hard to preserve the documented history of Ireland even in its less prevalent forms. Numerous images were generously donated from Fáilte Ireland, the national tourism development authority. These images came in many forms from positive printed images to film negatives and negative glass plate images (see image below). (Click images to view larger versions)

To share this history and make it available to the public, many staff members and interns have been scanning and digitizing the images so that they may be archived and saved in a more convenient and accessible way.

One facet of this archiving is scanning and digitizing the collection’s glass plate photographs. This area requires a certain amount of gentleness and care, more so than the other areas. Photographic plates were a common medium in photography before film. The process is similar to film in that a surface is covered in light sensitive emulsion; however, instead of a clear plastic film it covers glass plates. This emulsion is what absorbs light and creates the underlying image. Because the emulsion captures light the image is captured as a negative, so the light and dark areas are reversed; the darkest areas appear lightest and the lightest appear darkest. Glass plates are sturdier than film in that they are not likely to bend and distort an image. However, they are delicate in that they can shatter and break quite easily if not handled properly.

For the process of scanning the glass plate photographs, the equipment available to me was an Epson Perfection V700 Photo scanner, and for what I needed it worked seamlessly. The most important feature in any scanner you use is the ability to remove the inner cover to reveal a built-in transparency unit. The scanner needs to be able to capture the light that goes through the glass plate to capture the image.

The next step is to clean the glass flatbed of the scanner; any large particles or smudges could appear on the scanned image. These particles could also scratch and damage the glass plate.

It is also necessary to clean the glass plates themselves. Depending on age and what conditions they have been kept in, they may have dirt and smudges on them that can affect the image quality. I started with a dust free brush and lightly dusted the glass and emulsion side of the glass plate. It is particularly import to be gentle with the emulsion side (the less shinny of the two sides) because this is what is holding the image to the glass plate.

With the glass side of the plate I used a bit more pressure to clean the slide; I found that using a Q-tip or cotton bud and sometimes a little bit of moisture works wonders on cleaning light smudges of dirt.

The next step was to very gently place the glass plate on the glass of the scanner with the emulsion side down; I found this technique worked best for me. I tried a few different techniques, such as using film holders and area guides to hold the glass plate away from the surface of the scanner. However, I found this made the scanned images much lower in detail and quality. I also experimented using Mylar (a thin plastic sheet) to protect the glass plate and glass flatbed from scratching each other; however, I found that this creates Newton’s rings (swirly lines that can appear when two transparent things are on top of one another). I found being gentle and cleaning both glass surfaces for dust particles would prevent any scratching of glass.

Following these preparatory steps I finally began scanning the glass plate photographs. I used Adobe Photoshop to access my scanner settings and touch up the scanned image; under file and import I accessed my Epson V700 scanner settings. I used professional mode to access the settings where I can control document type, image type, and any adjustments I may need to make.

These are the settings I used:

These settings provided the best results. However, the most important setting to have was having a film type or some setting that allowed for scanning something transparent. Resolution size depends more on what you want to do with your image. The larger the resolution the better the image quality but also means the bigger the file; the same rule applies for the size of the grayscale.

The next steps involved a fair amount of trial and error with previewing the image, zooming in to the size of the image, and adjusting the image on the scanner to fix any slanting of the image. Finally, I finished the process with doing any touch ups the image may need in Photoshop. I tried to leave the image as close to its original form as possible. However, to see the image fully, sometimes certain areas need to be lightened, darkened, or given just a bit more contrast. Another problem with scanning glass plates is coming across a broken plate. I found that, with some handy Photoshop skills, the cracks can be edited to show the image in its original quality.

This article was written by Kelly Miner, an intern from St. Paul, Minnesota. Kelly came to Ireland as a part of the STINT Ireland Program to assist with digitizing and archiving glass plate photos from the Fáilte Ireland Collection at Dublin City Library and Archive.