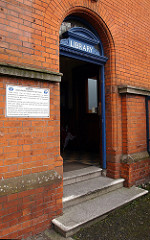 The archives of Kevin Street Library were accessioned by Dublin City Library and Archive in 2012. It is an important collection for exploring the history of Dublin Public Libraries, Cumann na Leabharlann, and also includes materials relating to the 1916 Rising and the Emergency Period in Ireland. The collection has recently been catalogued, with part-funding provided by Dublin City Council Decade of Commemoration Fund.  The Kevin Street Library archives can now be accessed by members of the public in the Reading Room of Dublin City Library and Archive.

Opened in 1904, Kevin Street Library was built after Dublin Corporation was encouraged to buy a plot of land on the street. With John Whelan as its first chief librarian, it is an example of the trend to provide free access to books to the citizens of the city. This collection contains material on a schools scheme, which provided free books to schoolchildren and material from the Dublin Technical Schools, both showing how the libraries resources were used to provide better access to reading materials for the citizens of Dublin. The library also subscribed to magazines which covered many different areas of interest from motors, travel and economics as well as Irish interests with Irish Monthly and An T-Oglach available to read. What the collection also tells us is the difficulties that the library encountered in its early years. Railway strikes meant that coal could not be delivered to heat the library. The outbreak of the First World War meant a reduction in reading material due to paper shortages. The library had to adapt to different functions due to outside factors including displaying pamphlets sent from London which encouraged men to join the war in Europe. The Soldiers and Sailors Family Association also had weekly meetings in the library throughout the duration of the conflict. The Irish Civil War also forced the library to adapt a new role when it was asked to be an aid dispensary due to the Peter Street Dispensary being occupied by soldiers. While providing us with an insight to the running of a public library in the early twentieth century, this collection also offers an insight into how the difficult political landscape at the time affected the library and the people who used it.

While most of the Easter Rising material in this collection is made up of letters sent by members of the public, explaining how the rising prevented them from returning books they loaned, they give an insight into how the rising affected people's routines and lives. A letter from a Mr T.L. Townshend for example, asks the library to reprieve a woman of paying a fine for a late book due to the book being destroyed along with her house during the conflict. Another letter from a former employee of the library was written to notify the library of the death of her husband, who was killed in the Custom House during the events. A letter sent by Eamon O’Duibhir is of significance as it was sent from Reading Prison, a prison that was used to hold many who took part in the rising. The letter mentions that Henry Dixon was also imprisoned there. Dixon along with John Whelan was central to the foundation of Cumann na Leabharlann, the Irish Library Association. Dixon had been a campaigner for Irish industry and culture from the 1880s onwards and was involved in many republican organisations set up to preserve Irish traditions.

Cumann na Leabharlann, or the Irish Library Association in English, was established in 1904 The collection contains the constitution and rules of the association, of which the first objective was to promote the establishment of public libraries and reading rooms. Thomas W. Lyster, who was Vice President of the association and also Director of the National Library of Ireland, originally voiced his concerns in a letter from February 1900 that the time wasn’t right for such an association to be set up but that he strongly believed that such an association should be set up eventually and recommended that the constitutions of the American Library Association and the Library Association of the UK be looked at as templates for the proposed constitution for the Irish Library Association. Lyster is later named as being a Vice-President of Cumann na Leabharlann. A letter written by author John DeCourcy MacDonnell is also included in the collection where he voices his approval of such an association being set up. With the Public Libraries (Ireland) Act of 1902 allowing rural districts to set up public libraries, Cumann na Leabharlann played an important role in making this happen. Letters from around Ireland are included in the collection that highlight the difficulties but also the successes of setting up these public libraries across the country. An Leabharlann, which was the association’s journal was also central to the aims of the association with a cover of the first edition included in the collection.

View a small sample of documents from the Kevin Street Library Collection on flickr.

Kevin Healion is an archivist with Eneclann.