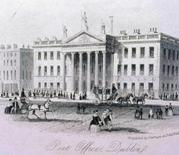 Dublin City Hall was the venue for our third Heritage Week event, our seminar ‘Living in Victorian Dublin’. This is the second in our annual series, the first was ‘Living in Georgian Dublin’ in 2016 and the next will be ‘Living in Restoration Dublin’ in 2018.  Our five speakers each spoke on a different topic, in order to cover all aspects of the Victorian city.  Michael Barry was our first speaker.  Author of Victorian Dublin Revealed he gave an overview of the entire city, demonstrating how many buildings, both public and domestic, have remained from that era and introducing them through his own splendid photography.

Our next two speakers, Dr. Susan Galavan and Dr Jacinta Prunty, formed exact opposites.  Susan’s talk was based on her new book Dublin’s Bourgeois Homes: building the Victorian suburbs 1850-1901.  The book is based on ten years of scholarship and is the first in-depth analysis of Dublin’s Victorian houses, looking at architectural form, internal organisation, building materials and landlord control all of which were referenced in her talk.  Jacinta’s talk was about the Dublin Slums and her book of that title is a work which has been welcomed by geographers and historians alike. It gives a comprehensive and insightful account and analysis of Dublin’s inexorable transformation into a slum city; it provides a template for researchers in Irish urban history; and it awakens social historians to what they have to learn from the historical geographers.  The shocking juxtaposition of comfortable bourgeoisie and desperate slum-dwellers, both living in the same small city, made for uneasy but necessary listening.

Listen back to the talks on SoundCloud:

The first speaker after lunch was Elizabeth Smith, who is a graduate of the Certificate in Local Studies at Dublin City Library & Archive and founder of our Local History Alumni Group.  Her topic was Belgrave Square: a microcosm of Victorian Dublin.  Elizabeth set out the parameters for the square, its early developers, how the houses evolved from two stories to two stories over basement (according as occupiers found that they could employ servants) and finally, the development of the central square – which was only completed in the 1970s.

The final speaker was Peter Costello. He is an author and editor, described by the American critic Robert Hogan as “a contemporary embodiment” of the “tradition in Irish literature of the independent scholar, who has an erudition embarrassing to the professional academic”.  Peter is one of Ireland’s leading Joyceans and has written, edited or contributed to some thirty-seven books and is an authority on the history of the Catholic Church in Dublin.  It was during the Victorian period that the greatest amount of church-building (both Catholic and Church of Ireland) took place.  This was an outcome of the emergence of the Catholic middle-class who were anxious to proclaim their arrival as much as to proclaim their religion. Nevertheless, building styles varied widely, from the Byzantine (Newman University Church) to the neo-Gothic (John’s Lane) to the neo-classical (St Andrew’s, Westland Row). What remained a constant is that Catholic Churches still huddled in side-streets – a prime example being the Pro-Cathedral in Marlborough Street.   This did not change much until the Catholic middle-class moved to the suburbs.

A general theme which cropped up in all of the talks was that Victorian Dublin is somewhat neglected by comparison with Georgian Dublin but the large audience at the seminar indicated that this is beginning to change. We are most grateful to Dublin City Council for allowing us to use the Council Chamber for the seminar and we are grateful to our colleagues, Alastair Smeaton for taking photographs and Gillian Colton for recording the talks for online streaming & podcasting.

l. Simington
1 year ago
Hello. It says this contention view the presentations has now expired. I live in the US, but was hoping to view the content.
Gillian
1 year ago
Hello, you can view them on Dublin City Libraries YouTube channel https://www.youtube.com/playlist?list=PLy0VziElSVTryBjneDV7gIHRyWiX66rxP