Memories from the past: Kildare in the 1950s 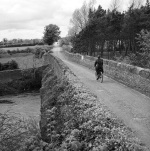 Kildare is a county that is steeped in rich culture from the horse racing fields of the Curragh to the beautiful canals that flow through villages and towns like Sallins and Athy.  The Grand Canal is an ideal place for activities like angling, boating, canoeing, sailing and rowing, the banks of the canal are very popular for walking and cycling. There are many former churches and castles dotted around Kildare that add to the scenery of this fine Irish county.

St Patrick’s College Maynooth (below, click image to view larger version) was founded in 1795 as a seminary for the education of priests and by 1850 had become the largest seminary in the world.  The Bishops began to look for a site and it was desirable that the college be near Dublin.  This seminary was urgently needed because in the seventeenth and eighteenth centuries it had not been possible to educate Catholic priests in Ireland.  The chapel, built by public subscription, was initiated by Charles W. Russell, President from 1857 to 1880.  St Patrick’s College also has a university as part of the campus.  Thousands of students from the four corners of Ireland and abroad attend the university each year.

Naas Courthouse (below, click image to view larger version) was constructed in 1807 to a design by Architect Richard Morrison, it was extended in 1860 when the four columned portico was positioned as it is today.  The Naas Courthouse was the original meeting place of the Poor Law Guardians who held their monthly meetings as did their successors Kildare County Council, from 1899 until the building was badly damaged by fire in the 1950s, which caused them to move to St. Mary’s.  The Criminal Courtroom was the setting for many films, due to its remarkable resemblance to the Old Bailey in London.

Theobald Wolfe Tone one of the leaders of the 1798 Rebellion, was a leading figure in the United Irishmen Irish Independence movement and is regarded as the father of Irish Republicanism.  After his death he was buried at Bodenstown, Kildare in 1798 near to Sallins where his family had a farm (below, click image to view larger version).

The Japanese Gardens (below, click image to view larger version) were devised by Colonel William Hall Walker, a wealthy Scotsman from a famous brewing family, the gardens were laid out by Japanese master horticulturist Tassa Eida and his son Minoru.  Their aim was, through trees, plants, flowers, lawns, rocks and water, to symbolise the ‘Life of Man’.  That plan was completed to perfection and Eida’s legacy is now admired by the 150,000 visitors who soak up the peace of the gardens every year.

In conclusion Kildare is a great place for either a short visit or holiday and Kildare also has a good transport network. From my work scanning the photographs I noticed that bicycle and horse and cart were popular forms of transport in the 1950s. Click images below to see larger versions.

The Fáilte Ireland Tourism Photographic Collection was donated to Dublin City Library and Archive.  The black and white negatives and colour slides date from the 1930s until the 2000s, they give a significant amount of visual information about Kildare throughout the decades.

This blog post was submitted by Deirdre Coleman while on work experience in Dublin City Library and Archive, October 2016.