On the 80th anniversary, we remember The North Strand Bombing on the night of 30/31 May 1941, when four bombs were dropped over the North Strand area by German aircraft.

The North Strand Bombing occurred on the night of 30/31 May 1941, when four bombs were dropped over the North Strand area by German aircraft. The impact of the bombing was strongly felt in the city of Dublin as it resulted in the death of 28 people, injured over 90 and caused the destruction of 300 houses.

Dublin City Archives hold a unique set of resources which tell the story of the North Stand Bombing and its impact on the people of Dublin. These include:

The Dublin City Council Minutes and Reports detail the formal response of Dublin Corporation, and a set of files from Dublin City Manager of the time P. J Hernon provide detail of the clean up operation.

Since 2009, we have also gathered stories and memories from ordinary Dubliners who were impacted by the bombing through our North Strand Bombing oral history project.

These files relating to compensation claims were transferred to Dublin City Archives from the Law Department of Dublin City Council. They include documents and maps which layout the areas of the North Strand which were to be purchased by compulsory order by Dublin Corporation, as set out under the Neutrality (Damages to property) Act 1941. There is also a copy of a public inquiry held by the Ministry for Local Government and Public Health on 23 April 1942 to investigate what should be done with the acquired areas, along with the individual compensation claims files of both residents and business owners whose property was destroyed or damaged.  Houses that were deemed habitable were repaired, whilst properties that were damaged beyond repair were purchased under compulsory order, and the displaced residents re-located to the new Dublin Corporation housing estates at Cabra and Crumlin.

The collection, which provides the greatest visual impact of the destruction, are a remarkable set of photographs by H. McCrae, photographer, who was commissioned by Dublin Corporation in 1941 to record the level of destruction caused by the bombing. 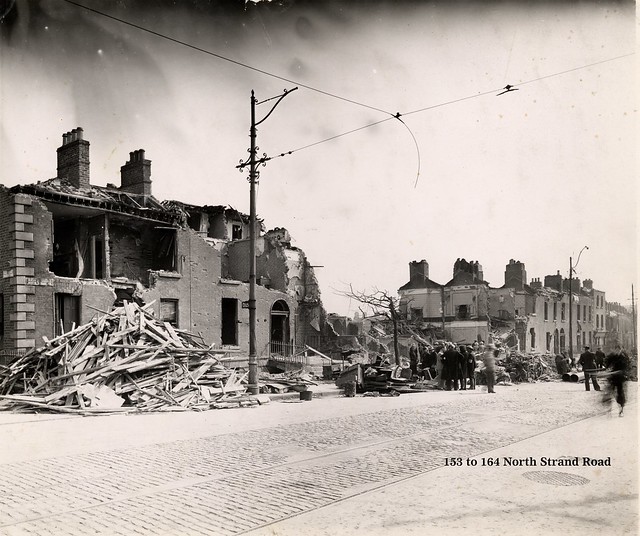