North Strand Bombing and the Emergency in Ireland 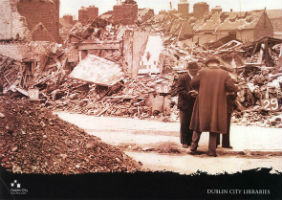 The bombing of Dublin's North Strand by Nazi aircraft on 31st May 1941 was an assault on Ireland's neutrality. The casualties were many: 28 dead and 90 injured, with 300 houses damaged or destroyed. The North Strand Bombing and the Emergency in Ireland seminar featured talks about various aspects of the bombing including censorship, compensation, and the role of the emergency services. This full day seminar to commemorate the tragedy was held at Dublin City Library & Archive on Saturday 29th May 2010.

In 'The other bombings: German bombings of Ireland, August 1940 to July 1941', Eoin Bairéad discusses the causes and consequences of the German bombings of Ireland during the period 1940 to 1941, including the bombings in Campile, Co. Wexford; Donore in Dublin and Belfast. Eoin Bairéad has an M.A. in Local History from NUI Maynooth where his main thesis concerned the bombing of Donore Terrace, South Circular Road, Dublin in January 1941.

The work is published as The bombing of Dolphin’s Barn, Dublin, 1941 in the Maynooth Studies in Local History series, 2010.

Irish Army during the Emergency Transcript

Dr Michael Kennedy is the Executive Editor of the Royal Irish Academy’s Documents on Irish Foreign Policy series – volume VII (1941-45) of which will be published later this year and will cover the North Strand bombing. He has published widely on Irish political, diplomatic and military history. His ‘Guarding Neutral Ireland’ (published in 2008) was the first book to examine the North Strand bombing from a military perspective.  Michael Kennedy and Victor Laing’s publication The Irish defence forces 1940-1949, the Chief of Staff’s reports is available for consultation in the Reading Room, Dublin City Library & Archive, 138-144 Pearse Street, Dublin 2.