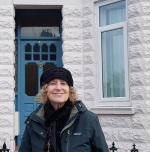 In this episode of the DCLA podcast, author Kathleen Hill gives an introduction to the life and work of Maeve Brennan, and how Ranelagh and New York helped inform the themes of exile and loss that run throughout her writing. Maeve Brennan was born in Dublin in 1917. Although she grew up in Ranelagh, her family left Ireland to live in Washington D.C. when Maeve was 17.

Kathleen reads from Brennan's novella The Visitor, and short stories 'Stories of Africa' and 'The Poor Men and Women' both published in Springs of Affection.

Introduction by jazz singer, composer and lyricist Emilie Conway who wrote "You Won't Forget Me" - A Celebration of Maeve Brennan in Words & Music.

Kathleen Hill contributed an essay about Maeve Brennan to the anthology Nine Irish Lives (Algonquin Press), about nine Irish men and women who left Ireland to live in the United States. She has published two novels, Still Waters in Niger, named a notable book at the New York Times, and Who Occupies This House, an editors’ choice at the New York Times.  Her memoir She Read to Us in the Late Afternoons was published in 2017. She teaches in the MFA program at Sarah Lawrence College near New York City.