This collection of images from the Fáilte Ireland Photographic Collection, held at Dublin City Library & Archive Pearse Street, highlights the surprising and unimagined day of bright sunshine and blue skies that finally emerged on the bank holiday of Monday, August 3, 1953. Dublin had an open-air weekend filled with 24-degree weather and an expected 32,000 visitors vacationing at the coastline for the August 1-3 bank holiday weekend. Most Dubliners escaped the city’s heat by fleeing to Bray, Dalkey, Dún Laoghaire, Blackrock, Merrion, Fairview and other routes leading to the sea and mountains, resulting in very busy swimming baths and bathing places on the coastline. The Irish Times reported that thousands of people arrived on the Dublin coasts by way of boat, train, plane or bus.

According to The Irish Times, more than 8,000 people were expected to land at Dublin Airport on August 1, while 4,000 were expected on August 2. Air traffic was therefore very heavy and the Irish Independent calculated that between Friday, Saturday, and Sunday, over 7,500 passed through Dublin Airport and even on Saturday alone, 107 flights were handled in the 24 hours, that’s a flight landing every 13 minutes!

There was even an unexpected 11 hours of sunshine on Saturday with an absence of a breeze, making temperatures soar from 18 to 24 degrees, which pleased incoming visitors. The Irish Transport System (C.I.E.) and the Great Northern Railway had a heavy day’s work as they catered to thousands of visitors by augmenting suburban services such as trains and buses for the rush of people to go to beaches along the Meath and Wicklow coastlines. Extra carriages were added to C.I.E. trains and provincial bus services boosting their power to four or five times their normal strengths. A C.I.E. official described the weekend as the busiest weekend since the Second World War, as twenty-eight diesel trains operated for the three-day weekend. Even the Dalkey-Blackrock-Merrion bus route had busy queues that reached from Nelson’s Pillar to the O’Connell Monument! 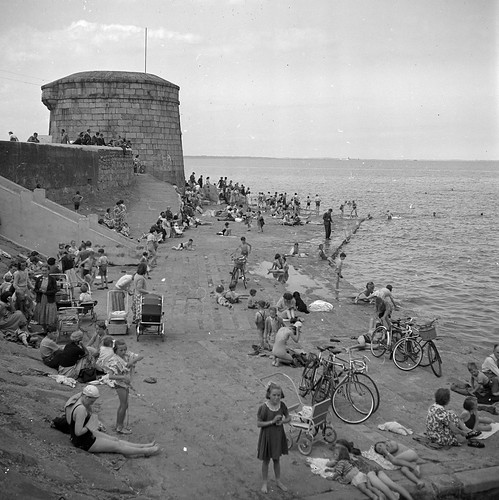 Fáilte Ireland, the National Tourism Development Authority, took these photographs in the mid 20th century to capture the mood on the unanticipated sunny day. The August 3 bank holiday quickly became the most hectic day for transport for the year as The Irish Times reported that it was the most enjoyable bank holiday weekend in the last 9 years.

The images were taken at Seapoint, Dún Laoghaire, Skerries, and Killiney in August 1953. If you recognize yourself or anyone else in any of the photographs, please contact Dublin City Library and Archive at [email protected] .

This image gallery was written by Amalia Monari, a EUSA intern at Dublin City Library and Archive, July to August 2015.