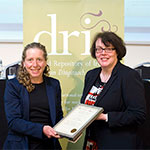 The Decade of Centenaries Award was established by Digital Repository of Ireland (DRI) in order to engage with custodians and assist in the long term digital preservation of valuable digital material relating to the 1912-1922 period in Irish History.

On Thursday 25 June 2015, it was announced that the Dublin City Electoral Lists for the period 1915, recently digitised by Dublin City Library and Archive, was one of three award winning collections.

The original Dublin City Electoral Lists (1898-1915) are in printed format and are held at Dublin City Library & Archive, 138-144 Pearse Street, Dublin 2. The Electoral Lists were maintained by Dublin City Council (then Dublin Corporation) on an annual basis in the Town Clerk's Department at City Hall. The two officials who carried out this work during this period were Stephen J. Hand, a general office assistant who was responsible for all matters relating to the franchise list, and James J. Henry, assistant to the Town Clerk, to whom Hand reported. Each Electoral List was printed and bound by Cahill & Co., Great Charles Street, Dublin; the Electoral List was then issued on 31st December and was valid for the following calendar year.

There are approximately 47,000 registered voters each year, which co-relates to almost one-fifth of the population of Dublin at the time and the electoral lists have huge potential to be used for local, social and genealogical research. However as the original classification scheme of the bound volumes was devised to suit the administration of elections, it is impossible to find a particular voter unless their address is known.

To address this issue, Dublin City Council has undertaken a project to digitize the electoral lists 1898-1915 as part of the City Council's activities during the Decade of Commemorations. To date, the Dublin City Electoral Lists for 1908-1915 have been digitised and a fully searchable database with over 400,000 records has been made freely available online. The project is directed by Dublin City Archivist Dr. Mary Clark. Scanning of Dublin City Electoral Lists is by Informa Ireland; OCR and production of database by John Grenham.

As recipients of the Decade of Centenaries award, Dublin City Library and Archive was provided with best practice guidance and digital preservation services by digital archivists from the DRI.  The 1915 Electoral Rolls & associated database was prepared for ingestion into the DRI and is now displayed at repository.dri.ie alongside the other award winning collections from National Irish Visual Arts Library and the Irish Capuchin Provincial Archives.