Mary Louise O’Donnell gave a talk and recital titled "Ireland's Harp: shaping a nation's identity" in the Central Library, Ilac Centre on 12 March. Her talk traces the history and evolution of this treasured national emblem and glorious musical tradition. You can listen to a recording of the event below or download to listen to offline.

The image of the harp – symbolic of the political and cultural landscape of Ireland for centuries – evokes strong sentiments in the collective Irish imagination. This iconic instrument became the emblem on Irish coinage in the sixteenth century. Since then it has been symbolic of Irish culture, music, and politics – finally evolving into a significant marker of national identity in the eighteenth and nineteenth centuries. 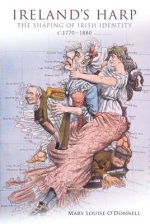 Mary Louise O'Donnell holds a doctorate from the University of Limerick and is a former Irish Research Council postgraduate scholar and postdoctoral fellow. Her first book 'Ireland's Harp: the Shaping of Irish Identity c.1770 to 1880' was published by UCD Press in 2014.

The harp became the emblem on Irish coinage in the 16th century. Since then it has been symbolic of Irish culture, music, and politics - finally evolving into a significant marker of national identity in the 18th and 19th centuries. The most important period in this evolution was between 1770 and 1880, when the harp became central to many utopian visions of an autonomous Irish nation, and its metaphoric significance eclipsed its musical one. Mary Louise O'Donnell uses these fascinating years of major social, political, and cultural change as the focus of her study on the Irish harp.