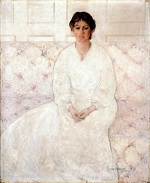 In this episode of the DCLA podcast, Jessica Fahy explores the fascinating connection between Irish women artists and the advent of modernism in Ireland from the early 20th century to the 1970s. Jessica talks about what Marian Hartigan called "The Quiet Revolution" which was the introduction of modern art to Ireland, almost exclusively by women. Jessica discusses their influences and how they reimagined and interpreted the artists and movements that inspired them.

As well as travelling abroad to develop their art, these innovative and generous group of artists, including Mary Swanzy, Manie Jellett and Sarah Purser, encouraged and created exhibition space for their Irish contemporaries.

Recorded at DLR LexIcon on 9 April 2018, with thanks to Marian Keyes, Dún Laoghaire-Rathdown Libraries for making this recording available to us.

Jessica Fahy is a freelance art historian based in Dublin, Ireland. Jessica has been teaching and researching various areas of European art for over 10 years and is passionate about sharing her love for the subject in an engaging and interactive way.
She teaches at UCD Adult education and the National Gallery of Ireland.