The Mansion House Dublin, 300 Years of History and Hospitality

A year–long series of events to mark the tercentenary of Dublin’s Mansion House culminated on 14 December 2015 with the launch of a beautiful book The Mansion House, Dublin 300 years of History and Hospitality edited by City archivist Dr Mary Clark.

Professor Christine Casey, guest speaker at the launch, has kindly given permission to reproduce her speech in which she reflects on the historical significance of Dublin's Mansion House and highlights some of the fascinating insights uncovered by the book contributors:-

"Dublin's Mansion House is one of three eighteenth-century free-standing houses which continue to fulfil their original role in the life of the city, the others being the Deanery of St Patrick's and the Provost’s House of Trinity College . The Mansion House is the earliest of the three and speaks eloquently of Dublin’s history over the past three hundred years." 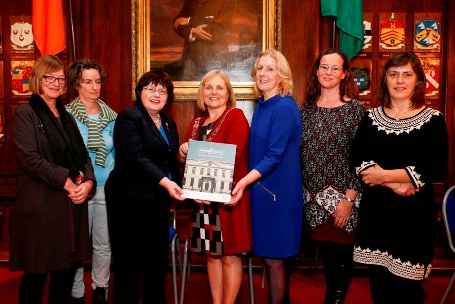 (speech continued) "Ironically it began life as a private residence built by the developer Joshua Dawson who helped to spread urban development away from the medieval city and from the Tholsel or City Hall. Though the old city waged a long battle to prevent a new bridge east of Capel Street, thereby thwarting the Gardiner and Fitzwilliam estates, the city fathers had no qualms in establishing the mayoral residence on the very edge of the expanding south-eastern suburb. When Mayor John Stoyte took up residence in 1715 the scene from his rooftop viewing platform extended across the expansive fields of the Fitzwilliam estate as far as Mount Merrion. Thirty years later, in choosing to build his grandiose townhouse on Coote Lane (now Kildare Street), the 20th Earl of Kildare, Ireland’s first peer, though questioned for building so far from the city, was doubtless cheered by the example of Dublin’s first citizen. Lord Fitzwilliam followed suit and by 1800 the Mansion House found itself in the heart of the Georgian city." 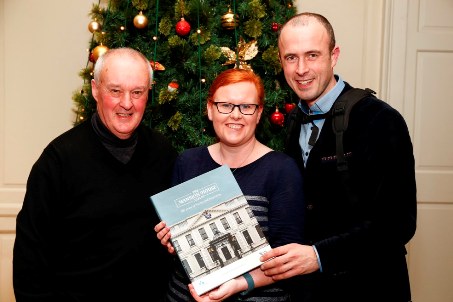 Photo above: The work of photographers Alastair Smeaton, Joanna Travers and Conor McCabe all feature in book.

(speech continued) "It was pioneering in the wider context being the second mayoralty house in the then British Isles after Newcastle. Dublin’s Mansion House was described in 1732 by a citizen of London as a ‘palace’ whose splendour had prompted the London merchants to build a new Mansion House. A mansion house was certainly needed to accommodate the pomp, circumstance and hospitality which attended Dublin’s mayoralty. It was not ideal that the Duke of Ormond’s arrival in Dublin as Lord Lieutenant in August 1703 was marked by a mayoral reception held in a tent in St Stephen’s Green.

Though they paid a good price, the city fathers got a good deal and it is noteworthy that after 300 years the original roof structure of Joshua Dawson’s house remains intact together with his floors of Baltic pine and his elegant staircase of Yew wood. The gilt leather hangings and silks of his reception rooms have long since gone, natural wastage in an intensely occupied house which has been home to so many lord mayors and their families. The brick facade with its parapet statues is now rendered, it was already darkened by pollution in the 1840s when Thackeray described ‘a queer old dirty brick house ... looking as if a storey of it had been cut off- a rasee house’. The low and relatively modest character of the house was accentuated by the building nearby of vast late eighteenth-century terraces of three and four storeys over tall basements, lending to the homely character noted by so many of the Mansion House occupants – most eloquently by the late Una Loftus who described it as ‘a loving house’, while the mayoral husband Ken Byrne or ‘Lady Mayoress’ (to give him his full title) likened the old house to an old person and as such deserving of tremendous care and respect.

This it has received in abundance. Dublin City Council and its lord mayors have led by example in the quality of recent research, conservation and adaptation of the building. In 1988 Carmencita Hederman commissioned a survey from the Irish Architectural Archive which opened the way for the full conservation management plan completed in 2009 and an energy audit and refit which ensures that electricity and hot water are provided by solar and photovoltaic roof panels. Research on the civic collections has resulted in a complete inventory of contents: the bookcase which stands in the hall came from the old House of Lords, the Lawrence portrait of George IV in the staircase hall hung in the Round Room for the King’s visit in 1821, the curious figurative light-fittings in the Drawing Room date from the Sibthorpe remodelling of 1900. If only we had such precision of record, inventory and provenance for more of the city’s great buildings." 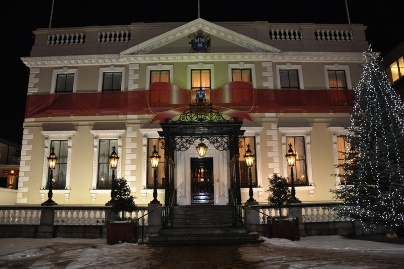 (speech continued) "This book tells all of this and more: not least it speaks of those who have lived and worked in the building. In his great treatise of 1450 Leon Battista Alberti wrote of this vital aspect of architecture:

'For every aspect of building if you think of it rightly is born of necessity, nourished by convenience, dignified by use…’ The Mansion House is at once a home and an instrument of civic governance. It is the site of ceremony graced by the powerful imagery of the civic sword, great mace and chain of office. Its rooms have seen occasions of state, of civic joy and sorrow. Its occupants have fed the children of famine, of the 1913 Lockout and have sheltered revolutionary leaders. I particularly enjoyed the image of Michael Collins posing as a janitor while sweeping the floor of the Round Room – the British Army, there specifically to arrest him, failed to recognize him. Here lord mayors have honoured citizens of diverse culture, religion and gender. The great room designed to receive a king housed the first Dáil in January 1919 and in 2014 witnessed the shaving of 179 highly principled and charitable heads for the Shave or Dye conquer cancer campaign. The Mansion House is perhaps best known to its staff led by the Manager who each year greet a new lord mayor. Of this Christmas season the most wonderful occurrence noted in the volume was the birth of a child to the lady mayoress: Sinead Mitchell was born here on December 30th 1976. In conclusion, editor and author Mary Clark is to be congratulated for this holistic and engaging study, and likewise authors Nicola Matthews, Susan Roundtree, Patricia Wrafter the late Una Loftus and Fanchea Gibson, Andrew O’Brien and Christian Keegan for marvellous insights into the genesis, metamorphosis and vibrant life of this endearing building'."

Note: The book, complete with striking illustrations, is being distributed by Four Courts Press to all good bookshops and can also be ordered directly from the Four Courts Press website. It will soon be available to borrow from your library, please check the Library catalogue.