Maps of the Terenure and Crumlin Estates 1879 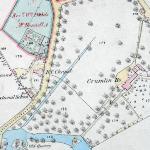 A collection of eight Ordnance Survey maps, donated to Dublin City Library and Archive, constitute a wonderful addition to local and family history for the Terenure Crumlin area in the late 19th century. The maps are folded and bound into one volume, bound in half leather with gilt lettering on the top cover: Maps of the Terenure & Crumlin Estates, Co. Dublin, the property of Sir Robert Shaw, Bart. 1879. 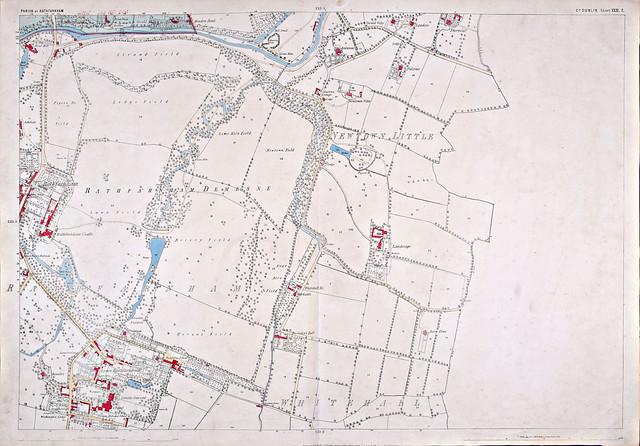 The base maps are the Ordnance Survey 1:2500 maps (25 inch) of 1866. This scale of map shows every field, every house and plot, it lists house and cottage names, shows physical and man-made features and gives an indication of land use, showing trees and gardens. The Shaw maps are hand coloured, showing the extent of the estate, and tenants’ and lessees names are written in copper-plate handwriting in each holding. The date on the cover is 1879, so this situates the occupancy of houses and lands on the estate at this period.

The estate of the Shaw family began in the late 18th-century when Robert Shaw senior purchased Terenure House in 1785. The estate was extended in 1796 when Robert Shaw junior married Maria Wilkinson, daughter of Abraham, and received as part of her generous dowry, the estate of Bushy Park. When Robert junior succeeded to the estate he made Bushy Park House his family seat, which it remained until the 1950s when it was sold to Dublin Corporation

This list of late 19th-century residents of the Shaw estate is a valuable addition to family history. It is noticeable that many tenants occupied several different plots, while others had a dwelling and a garden or some land. Schools, churches, antiquities, quarries, commercial and industrial buildings are shown. The maps provide a vivid snapshot of this area at a particular time in history.