Remembering and reinventing the Rising 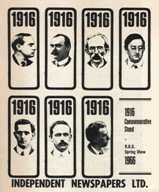 Listen to historian Donal Fallon discuss the history of commemorating the 1916 Rising, while looking at events such as the first anniversary in 1917, the often-violent Easter parades of 1930s Dublin and the fiftieth anniversary in 1966.

Recorded on Thursday 23 June 2016 at 6.30pm in Dublin City Library and Archive as part of the Dublin City Council 1916/2016 Centenary Programme.

Remembering and reinventing the Rising transcript

Donal Fallon runs the Come here to me social history blog and is the author of John MacBride in the 16 Lives series, The Pillar: the life and afterlife of Nelson's Pillar and Come here to me! Dublin's other stories. He presented popular talks and tours as part of the Dublin Remembers 1916 programme and coordinated the My Area in 1916, Mo Cheantar agus 1916 project.

See also: Podcast Dublin Burning: The Easter Rising and its consequences, a series of three lectures by Brian Hanley

Browse and search the Birth of the Republic Collection online.