The Yeats Sisters and the Cuala Press

At the same time as the Celtic Revival during the late 19th - early 20th centuries, the Arts & Crafts Movement was making its way across Europe. This movement saw an international increase in the making and purchasing of handmade things and included ‘cottage industries’ such as stained glass, woodworks, ceramics, tapestries, and more. The Yeats family, in particular, was greatly involved in several aspects of both the Celtic Revival and the Arts & Crafts Movement. While W.B. was making his mark in the literary world and Jack was working as an artist and illustrator, the Yeats sisters, Lily and Elizabeth, were running their own businesses.

Some of the most interesting products of the Arts & Crafts Movement in Ireland came from the Dún Emer and the Cuala Industries. Both businesses were small co-ops that specialised in embroidery and book printing. These cottage industries were owned and operated by Lily and Elizabeth Yeats. In 1903 they set up Dún Emer with Evelyn Gleeson and worked with her until 1908 when they split off on their own and changed the name to Cuala Industries, which then lasted until 1946. These businesses were noteworthy in that they would only employ women and also gave art and embroidery classes to any who wanted them.

The embroidery side of the company was run by Lily, and with her skills she made various domestic products like cushion covers and sofa backs as well as altar cloths and banners for churches. Her work can be seen in churches around Ireland, the most famous being St. Brendan’s Cathedral, Loughrea, Co. Galway. This church also used stained glass from Sarah Purser’s company, An Túr Gloine, another business from the Arts & Crafts Movement. Lily didn’t design most of what she worked, but rather used patterns designed by George Russell, Jack B. Yeats, Mary Cottenham Yeats, and others. Lily’s embroidery was shown at many fairs in both Europe and America, where it was consistently praised.

Elizabeth was the head of the presses at both Dún Emer and Cuala Industries and became well known throughout the world for her talent at book printing. When she began the press, Elizabeth stated that she wanted to “revive the beautiful craft” of book printing in Ireland. Along with books, she printed greeting cards, hand-coloured prints, pamphlets, and small monthly magazines known as broadsides. Most of what was printed at the press involved a famous writer or artist from the time, such as A.E., Katharine Tynan, Lady Glenavy, Pamela Colman Smith, and more. Even W.B. helped out at the press by working as an editor and allowing his poems to be used for the greeting cards and prints. Elizabeth even printed several first editions of W.B.’s works, including The Wild Swans at Coole and Reveries Over Childhood and Youth,as well as the works of other writers like Lady Gregory and J.M. Synge. Along with working at a printing press, Elizabeth was a fairly talented artist drawing several greeting cards and prints herself. Jack was also involved with the press, having made over 200 drawings for various cards, prints, and broadsides.

W.B. and Jack were more involved in the Celtic Revival than in the Arts & Crafts Movement through their writings and art. Along with writing, W.B. helped establish the Abbey Theatre in the hopes of creating a uniquely Irish literature. This was because he believed that ‘there is no great literature without nationality and no nationality without literature.’ Jack formed his own career as an artist; typically painting scenes from circuses, the sea, or those involving horses. 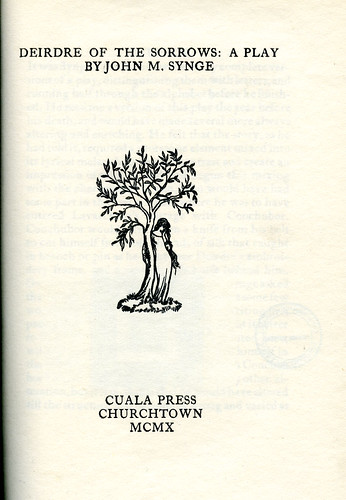 Julie Spoehr, a summer 2014 intern at the Dublin City Library & Archive, compiled this collection. She is an American university student who studied abroad through EUSA and IFSA-Butler.

The Dublin City Library and Archive has a variety of items related to the Dún Emer and Cuala presses as well as some of the Yeats family in general. Letters from all members of the Yeats family can be viewed as well as first editions of W.B.’s works that were printed at Cuala along with the books from other writers. Unfortunately the library doesn’t have any examples of Lily’s embroidery work. Jack’s work can be seen at galleries throughout Ireland and some of his smaller drawings are available at the library, but these are mostly his contributions to Cuala.