On this Day... Rathmines Township Created 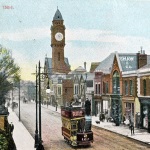 The Rathmines Township was created on the 22nd July, 1847, by Act of Parliament. In 1862 the townlands of Rathgar and Sallymount (the latter comprising present-day Ranelagh) were added to the renamed Rathmines and Rathgar Township. The Township was further extended in 1866 to include townlands in Uppercross, while Milltown was added in 1880.

Originally the Township was governed by Commissioners, who felt they needed a place where they could meet and conduct their business. Their first house was at 71 Rathmines Road, so it really became the first town hall.

The original Township was created as a sanitary area, but new functions were added with subsequent Acts, including responsibility for public lighting and water supply as well as drainage, which was provided jointly with the Pembroke Township.

Under the Local Government (Ireland) Act of 1898 the Rathmines and Rathgar Urban District Council (UDC) was established as the elected governing body. After 1898 the UDC built a number of small housing schemes under legislation for housing of the working classes.

The UDC met in the magnificent Town Hall on Rathmines Road, the first meeting being held in January 1899.  Work on the Town Hall began in 1895 on the site of the previous town hall. The commissioners asked one of the best-known and respected architects of Ireland, Sir Thomas Drew, to design this building. He put up a fine building of red sandstone and brick with a bay window on the first floor. But the most famous feature was the high clock tower, which could be seen from afar. The clock on the tower was made by a local firm called Chancellor and Son. They claimed they could beat any English and Scottish company so they got the job. The clock has four faces, one for each side of the tower. Before the clock could be run with electricity, the four sides would often show different times so the clock was called 'four-faced liar'.

The town hall had a boardroom where the town commissioners would hold their meetings. There was also a gymnasium, a kitchen and a supper room (other people could hire this room out). There was an assembly hall for meetings which could fit 2,000 people. It had a stage and a room for an orchestra. Apart from being used for council meetings, the  Town Hall also became a centre for social life in the area with concerts, dances and other events. Percy French, who wrote many well-known songs about counties in Ireland and who had his own theatrical company, gave many performances in the town hall and one of the first moving films made by a man called Edison was shown here in 1902. The Rathmines and Rathgar Musical Society also performed there (see below).

The first public library in Rathmines was opened in June 1887 at 53 Rathmines Road. In 1899 it moved to 67 Rathmines Road, where it stayed for 14 years. Rathmines Fire Brigade later used this building. The library was then moved to its present location at 157 Lower Rathmines Road, where it opened on 24th October 1913. The present library was built with the aid of a £8,500 Carnegie grant. Andrew Carnegie was an American industrialist who gave money to build libraries and museums across the world. The architects of this fine building were Batchelor & Hicks.

The Baroque style façade of Rathmines Library is composed of Arklow brick walls with terracotta dressings, and was designed to fit in with the style of the Town Hall located across the road. It was also intended to be an ‘ornament to the township’. The library and technical school next door were part of the same building but each had a separate entrance. The library entrance is flanked by two-storey high Ionic columns. A large, stained glass window depicting an allegory of literature is located above the entrance. The window was designed by William Morris, a famous English artist and designer of the time. A ventilating cupola is located on the centre of the roof. Large Venetian windows provide light to the ground floor. The interior retains a fine staircase to the first floor which divides into two parallel flights.

The Rathmines and Rathgar Musical Society was founded in 1913.  Still in existence today, its first performance was the Gilbert and Sullivan Operetta, The Mikado.  Based in the prosperous and expanding townships of Rathmines and Rathgar, the members of the society tended to come from the members of the middle classes who were not attracted to the music or song of the Celtic revival.

Under the Local Government (Dublin) Act of 1930, the district of Rathmines and Rathgar became part of the City of Dublin, under the administration of Dublin Corporation. The UDC held its last meeting in the Town Hall in 1930 and today the building is the Rathmines College of Further Education.

1 month ago
My Gran father and Gran mother live and got married in Rathmines. They cane to England in 1913. They live in Colne in Lancashire.