Bog bodies suffered violent and grisly deaths. Of these bodies, the most famous, Cashel Man was discovered near Portlaoise in 2011, and at over 4000 years old, is said to be the oldest European bog body ever found with skin intact; then there is Old Croghan Man from Co. Offaly, and Clonycavan Man from Co. Meath.

At 6’6", Old Croghan Man, who was killed between 362 BC and 175 BC, was a giant of a man. He bore the appearance of a nobleman from his well-manicured soft hands to his diet, rich in meat. Clonycavan Man was little more than 5 ft and used pine resin to keep his hair in place, probably sourced from Spain (a precursor to hair gel!) and demonstrates that he was a person of some wealth and standing in the community. 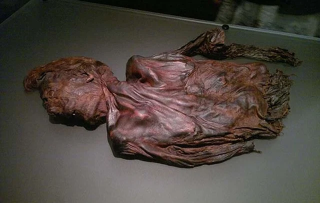 Photo on the left shows the bog body found in Cashel Bog. Old Croghan man had holes cut through his upper arms through which ropes were inserted to restrain him, after which he was repeatedly stabbed, had his nipples sliced off, and was then cut in half. Clonycavan man was disemboweled and suffered three blows to the head with an axe, once across his body, and then had his nipples removed too. Ned Kelly, former keeper of antiquities at the National Museum of Ireland told the Irish Examiner that a clear pattern has emerged in each case. "We do not think of these bog bodies in the same way as we do axes or implements that are found," he said.

"You have to remember that these are individuals and it is absolutely essential to deal with their remains in a dignified manner. There would be no justification for taking these bodies unless we do so with respect and with the serious intent to tell their stories on their behalf."

"Human sacrifice was apparently a normal part of the Celtic rituals, especially of kings in hard times. The killings tend to be excessive in that more is done to the bodies than would be required to bring about their deaths. Bog bodies may have their throats cut, been stabbed in the heart and have other cut marks. However, it is absolutely not torture, but a form of ritual sacrifice."

"The king had great power but also great responsibility to ensure the prosperity of his people. Through his marriage on his inauguration to the goddess of the land, he was meant to guarantee her benevolence. He had to ensure the land was productive, so if the weather turned bad, or there was plague, cattle disease or losses in war, he was held personally responsible."

Cutting the nipples was more than torture. The aim was to dethrone the king. "Sucking a king’s nipples was a gesture of submission in ancient Ireland," says Kelly. "Cutting them would have made him incapable of kingship in this world or the next."

"By using a range of methods to kill the victim, the ancient Irish sacrificed to the goddess in all her forms. This manner of death is peculiar to the ritual killing of kings. It means that a king was being decommissioned."