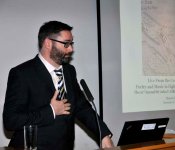 (Podcast) 'Live from the Conniving House: Poetry and Music in Eighteenth-Century Dublin' the 21st Annual Sir John T. Gilbert Lecture, was given by Dr Michael Griffin, University of Limerick at the Dublin City Library and Archive on Wednesday, 24 January 2018.

The Conniving House tavern, long since forgotten, opened in 1725. On the water not far from where Sandymount Green is now, it is the cultural and geographical starting point for this lecture on the lively interaction of poetic and musical cultures in eighteenth-century Dublin. The only verbal account that we have of that venue comes from Life of John Buncle, esq. by Thomas Amory, who heard there the famous Larry Grogan playing the pipes while Jack Lattin, ‘the most agreeable of companions’, played matchlessly on the fiddle. Other writers of the period, such as Laurence Whyte and Charles Coffey, recorded an energetic native musical culture. This lecture explores a fascinating moment in the history of Dublin’s poetical and musical cultures, one which yields several compelling instances of cross-cultural connivance.

Dr Michael Griffin is Senior Lecturer in English at the University of Limerick. He is the co-editor of the soon-to-be published Cambridge Edition of the Letters of Oliver Goldsmith, and the author of Enlightenment in Ruins: The Geographies of Oliver Goldsmith (2013). He has also edited Thomas Dermody: Selected Writings (2012) and The Collected Poems of Laurence Whyte (2016). He has published a range of journal articles and book chapters on eighteenth-century Anglophone Irish poetry and print culture. His essay on Goldsmith’s poetry features in the recently published Cambridge Companion to Irish Poets.

Listen to the lecture

Thank-you for listening to the Dublin City Libraries and Archive Podcast. To hear more, please subscribe on iTunes or SoundCloud.

About John T. Gilbert and the Gilbert Library

John T. Gilbert's valuable library of mainly 17th and 18th century books and manuscripts relating to Dublin and Ireland was purchased by Dublin Corporation after his death in 1898. It forms the nucleus of the special collections of Dublin City Public Libraries.

Born in 1829, Gilbert was author of the influential three volume 'History of the city of Dublin', published from 1857-59. He was a firm advocate of documenting the history of his native city using primary sources. His work on manuscripts relating to the city alerted him to the need for the preservation of Irish public records, many of which were in a neglected and vulnerable condition. He commenced a campaign, which eventually led to the setting up of the Public Records Office in the Four Courts. He calendared the records of Dublin Corporation, which date from the twelfth century, and began the series of printed volumes The calendar of ancient records of the city of Dublin.

The printed catalogue of the books and manuscripts of the Gilbert collection compiled by Douglas Hyde, LL.D & D.J. O'Donoghue is available for consultation in the Reading Room. View John T. Gilbert in the library online catalogue.